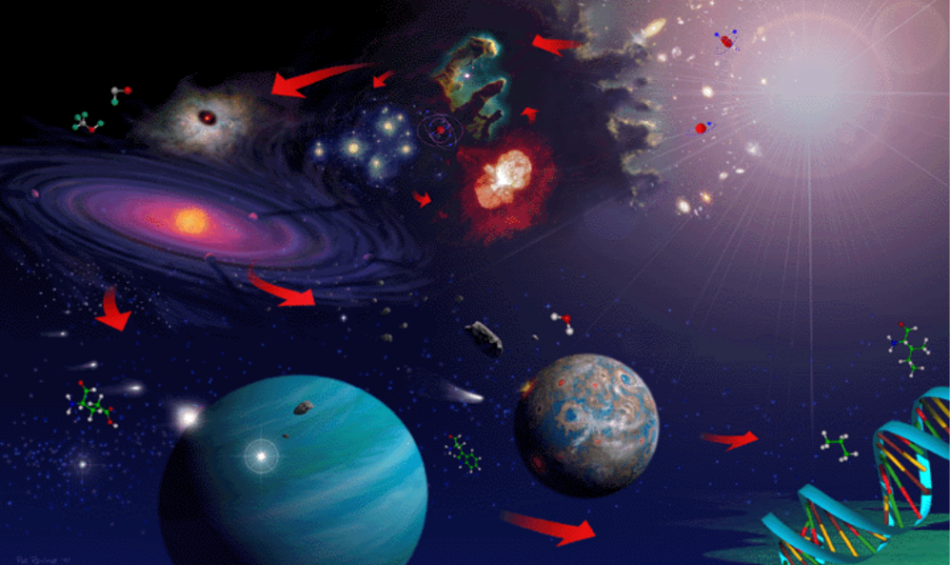 To answer Pascal's philosophical questions concerning our place in the universe and the passionate interest of the public, the field of action of scientists could not be limited to astronomy. These questions also concern the sciences of the earth and life: physics, geology, paleontology, biology, biochemistry, exobiology, sociology, neurosciences, not to mention cosmology or astronautics. Multidisciplinary research is opening a new branch of astronomy, bioastronomy, which has gradually developed since 1982 on the initiative of Michael Papagiannis.

Its official organ is the Commission 51 of the International Astronomical Union. It publishes its activities through the magazine "Bioastronomy News". Its objective is to organize and develop the search for life in the universe through new niches of studies. Most sciences are closely intertwined in this new industry that can help us understand our past and define our destiny. According to Dan Werthimer of the SETI Institute, the budget for bio-astronomy represents 50 million USD a year (excluding budgets devoted to cosmology, radio astronomy research and astronautics that work on own budgets) The United States provides most of the subsidies.

Cosmology makes it possible to understand the formation of matter, how it has appeared in the universe and under what conditions. It is a very extensive and very complex field of knowledge to master which imposes on physicists an extremely thorough and rigorous search. This area deserves us to devote a book to it.The exobiology consists in discovering the molecules synthesized in space by ambient radiation. Next comes the evolution of these molecules towards a prebiotic stage where an extraterrestrial chemistry is organized. Finally, it determines whether a similar process could engage on Earth.

It is also the science of the future, since the discovery of another life form in the universe will mark a fundamental stage in our evolution. At a more applied level, the discovery of an extraterrestrial process that can improve our metabolism or our living conditions will also influence future generations. Radio astronomy offers us the indirect means of reaching the regions of space that the eye catches or that matter hides from us. The sensitive ear of radio telescopes allows us to locate organic molecules in space, but also to detect possible extraterrestrial civilizations as advanced as ours.

It is also the most popular discipline, much less expensive than astronautics. This track is the oldest, born in 1930 with the fortuitous discovery of the radiation of the Milky Way by Karl Jansky, but whose future under the SETI programs is uncertain as we will discover.The field of investigation of bioastronomy is one of the most extensive disciplines, using cosmology, exobiology, radio astronomy and space exploration. Each of these disciplines includes so many sub-domains which often oblige researchers to work in collaboration with foreign laboratories.

Space exploration has attracted many researchers. Through our atoms we are linked to the cosmos. Without the stars of the first generation and the dispersion in space of the different chemical elements synthesized in the course of their evolution, Nature would never have had the possibility of creating this increasing complexity and bringing about Man. Somehow we are connected to the universe, we are made of the same dust as the stars.